While doing the work to get a rolling frame done, I had been online looking at petrol tanks, seats and various electrical things that I would eventually need. Its been hard not to buy a whole lot of stuff but from reading online, that’s not necessarily the best way forward. Yes I have a rolling frame but I don’t know if the engine will run or not and without that there won’t be much need for anything else.

I did however decide to replace the old carburettor with a new Mikuni round slide one and a POD air cleaner, get a new spark plug and then service the engine as best I could before trying to get it started. I also bought a Haynes workshop manual.

The first issue I had, with getting the engine back into the frame, was that there were no engine bolts and mounting hardware in the box of parts that came with the bike. Ebay was able to help with that and a complete set turned up within a week from the US. The next issue was trying to place the engine into the frame and because the engine is really heavy and structurally part of the frame, this was quite hard to do.

The only way I could get it to work was to have a few beers and then use a tie down strap to raise the engine up off the lift and then ratchet it up into position. Once the engine was mounted in the frame, one of the old seat brackets had to be cut off to allow for the new air cleaner to fit and the throttle cable, at the top of the carburettor, just cleared the frame nicely.

When I got the bike the engine was complete but didn’t have the correct kickstart lever and only had the header pipe for the exhaust system. I found out (the hard way via an idiot ebay trader) that the kickstart levers came in 2 spline sizes – 19mm and 16mm depending on what year you have. My 1979 has the 16mm splined lever.

These bikes have a lot of compression as standard and use an automatic decompressor cable system to allow for easier starting but if you use the wrong lever the kickstart shaft can actually break. Also you need the leverage of the correct kickstart to make it easier to kick over and once you have adjusted the decompressor correctly, you shouldn’t have too many problems starting the engine. It took honda another 3 years before they had an electric start 500 single, the FT500. 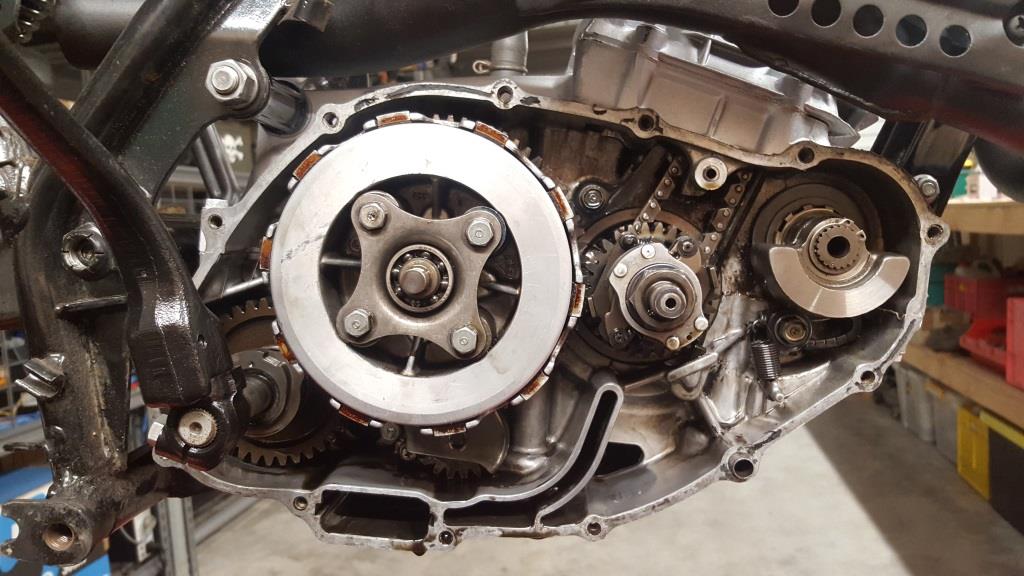 ◄ Back
Next ►
Picture 1 of 11
The bike also came with the factory carburettor, a 32mm Keihin, which has a double cable system (push/pull) for the throttle. I didn’t want to use the old carburettor as most thumper type forums had recommended upgrading to a Mikuni 38mm as one of the easiest ways to get more horsepower out of the stock engine. If you order the VM38 kit from the Australian website – https://www.mikunioz.com/shop/mikuni-vm-round-slide-carb-kits-4-stroke-read-disc-to-select/  they are very helpful and recommended the correct jetting kit for this engine.

Getting the right flange for the carburettor spigot is also essential as the whole carburettor hangs off this and it must be an airtight fit. The kit comes with a quick action throttle and a throttle cable. You may need to consider changing the throttle cable adjuster depending on the frame of your bike and what the access to the top of the carburettor will be like . I went for a  chrome POD type air cleaner instead of using the original air box assembly.

I drained the oil, removed the clutch and stator and basically checked to see if everything was okay. Both the stator and the ignitor cables were in pretty bad shape with the ignitor cable having been soldered up numerous times. I was lucky enough to source a used stator cable in great condition and a NOS ignitor cable and assembly, both off Ebay. The stator is only 6 volts and my plan is to eventually change to a 12v system as I purchased a used 12v stator out of a CB250 which should do the job nicely.

The clutch was in pretty good condition and the plates were still serviceable according to the Haynes manual so it and the NOS ignitor cable went back into the engine. I put the 6v stator with the new cable back in the bike for the meantime. Once the engine starts and runs I will upgrade it to 12v. I have an XR500 flywheel that I got with some other parts, which is a little bit lighter but I don’t know if I will put that in it or not.

The Haynes manual has been awesome, especially with the wiring. The loom was in really bad shape and had been hacked but was still OK to get an idea of which wire went where. When I replaced the stator cable I added a new wire for the neutral light as it had been cut off. The ignition coil, a new frame earth and the new plug were wired up temporarily to see if we could get any spark but for some reason it was dead.

Checking the stator cabling again with a multi meter, proved there was no continuity, and because I had replaced the spark plug lead and cap with automotive ones I had got from Supercheap, I started there. I grabbed a spare lead and cap I normally use on my scooters just to test with and voila we now have spark!!

Just a few more things to do before we can try starting it.