This years ride started out well with fine weather and no wind being a real bonus for any scooter trip. I met up with some of the Canscoot guys at Smash Palace the night before for a plot and scheme session. The route had originally been chosen by Matt from Wellington but the consensus was that the distance was going to be too far for some of the riders participating so Craig organised another shorter ride to the West Coast.

Riding up over the Arthurs Pass is great for small capacity machines – when its dry. In the rain it’s not much fun but that’s scootering and after all, it does rain a lot on the West Coast. The first day was basically Christchurch to Punakaiki where we stayed at the local camping ground and enjoyed the pancake rocks and blowholes and the local taverns meals and drink selection. Punakaiki is a small community on the West Coast of the South Island of New Zealand, between Westport and Greymouth. The community lies on the edge of the Paparoa National Park. By the time we got to Greymouth, later in the afternoon, the rain was torrential. We had to stop at a local tavern to dry-out and just watched some of the heaviest rain I have seen for ages, hoping it would stop some time soon. 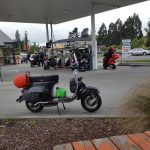 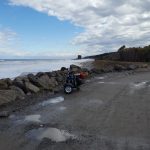 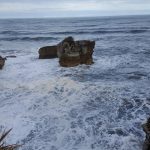 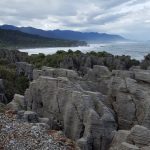 We left Punakaiki to head to Reefton, which by the map, isn’t very far but we made a few stop offs on the way to keep things interesting at Cape Foulwind and some cross country riding at the old Millerton coal mine. The Westport Coal Company built the Millerton Incline in 1891 and the Millerton Mine began production in 1896. Mining at Millerton ended in the late 1960s. The Millerton Incline was a narrow gauge (2 ft or 610 mm) incline consisting of two parallel tracks on which the coal tubs ran, being hauled by rope. Remnants of tracks, trucks, bath house and other installations are still visible. The Millerton Incline was in its day quite a feat of engineering and the remains of this incline and its infrastructure are more accessible than those of the more famous Denniston incline. The Millerton Incline was used to convey tubs of coal from the mines around the Millerton area to the Bins at Granity, which in their day were the largest coal loading bins of wooden construction in NZ. 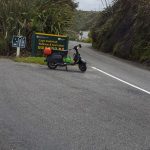 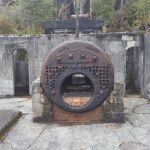 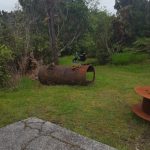 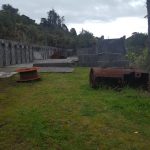 Reefton is an old gold town and in 1888 became the first town in New Zealand and the Southern Hemisphere to receive electricity, the work of Walter Prince, and its streets were lit by commercial electricity generated by the Reefton Power Station. Some of us stayed at the old nurses home and some had organised local holiday homes. Lee was good enough to host a BBQ and a few drinks for the team and an excellent night was had by all. This ride was only the second I have been on where a family of scooterists was involved with all of Lee’s family either riding scooters, he had worked hard to have 3 scooters ready for the trip, or some travelling in a back up vehicle with a trailer. Lees partner Suzy put in a gutsy effort to even complete the ride in some very trying conditions, even for experienced riders and to his credit he rode all the way with her as she battled through after a previous scooter mishap had dented her confidence. You guys rocked.

Originally the ride was to go back through the Lewis Pass to Christchurch and some of the team did that while the rest of us went back through Arthur’s Pass instead. As per any long weekend there were a few idiots on the road trying to pass scooterists with boats and assorted trailers on, just stupid stuff when we were able to sit on 90kph anyway. It was good to catch up with Ian from Nelson and Chalkey. Joe 90 had an electrical breakdown on his Gilera which ended his ride on day 2.

Craig, thanks for organising a fun ride with some interesting stops.

Looking forward to next year.