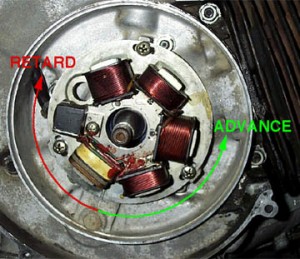 I’m still running in the SS180 so every chance I get, which isn’t as much as I’d like, I take it out for a spin. It’s got nearly 300kms on it now so only a couple of hundy to go.

Whilst riding a couple of weeks ago, I pulled up to a busy roundabout, sat in neutral waiting and went to take off in first but only to find I was reversing into the car behind me. In to neutral again then back into second and try another take off – same thing. Up until now the scoots been starting and running really well.

I had to push it off to the side of the road and got on the phone to Mike Salmon who owns Not a Motorcycle Shop in Upper Hutt. Although he had heard of this happening but didn’t know anyone that had experienced it. Apparently my timing must be too retarded, which didn’t mean much to me, but it was time to check it out. He recommended 23 degrees BTC (before top dead centre) for the timing.

The scooter started up fine – no reverse gear – and ran good all the way back to the shed. Mike had suggested a timing light would be needed and I found a good article here – http://www.scooterhelp.com/tips/timing/electric.timing.over.html  . They also have a degree wheel that you can download and attach to some card or laminate.

If you haven’t done this before it can be a little confusing and as I have had a crap run with CDI units, I wasn’t too keen to stuff anything up. The guts of it is that the flywheel turns clockwise via the crankshaft in relation to where the piston is, so to set the correct timing we need to find out where the piston is at the top of its travel in the cylinder. This is called TDC (top dead centre). There is a tool you can make on the scooterhelp site to do this with or just use a pencil or something similar – be careful you don’t drop it down into the cylinder or get it caught. This is how I did it:

I took the scooter for a ride this afternoon, while there was a break in the crap weather, and it seemed to start better and run well. Once I have a few more km’s on the clock I will check the timing again and then look into the fuel system and spark plug to see how they are going.