The wiring for this project has always been a bit of a concern and mainly because it’s not something I have done much of, on a motorcycle. Vespa scooter wiring, while fiddly, is pretty basic and you either have a battery or you don’t depending on what model you have. Some motorcycles and scooters actually need the battery to run or have electric start and some can provide ignition and lighting via a magneto or a stator. Most vintage scooters are 6v systems and generally, the lights are pretty average. Some 6v bulbs are getting harder to find and I would look at upgrading most scooters to 12v LED lighting.

This Honda has factory 6v CDI ignition, lighting and a battery but is kickstart only. The lights on the one I had years ago worked fine but the headlight was never that bright so I have scoured the internet to see what can be done to convert it to a 12v system, without a battery. As I have a few older scooters with no battery and 12v led lighting, I thought that I may as well wire it up the way I’m used to doing and just see what happens.

There are four feeds from  the stator – one of them for the original 6v lights and one for unregulated feed for the original 6v headlight. I may be able to use both of these to power my 12v scooter regulator and make enough power to get the lights working. If not I will need to upgrade it accordingly.

I have seen a lot of cafe racer style projects based on road bike frames and engines that allow for easier wiring under the seat with a battery in its original position or in the rear hump of the cafe seat (if it is made of fibreglass or similar and has a cavity for that). This frame for this project doesn’t really allow for a battery and the best place to centralise (and conceal) the wiring would have to be under the tank. 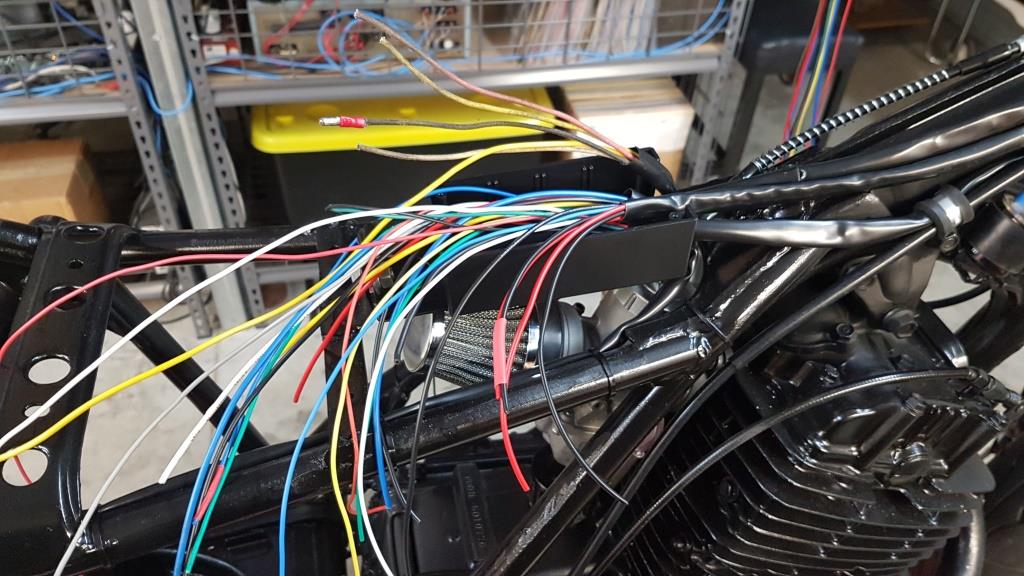 Image 1 of 19
Running the cabling around the frame is pretty straight forward and I have just extended the cabling where required to get to a point under the tank. I have soldered and heat shrinked all connections and maintained the colour codes for most of the lights. I had some 12v LED’s for the front and got a combo tail light for the rear. The headlight is very bright but I don’t know how it will go with the regulator I am using.

There is a relay for the headlight switch and the horn is quite loud. I had to adapt the original bracket for the rear brake switch to work with the new brake system and the front brake assembly already had a switch that just needed wired up. The 12v regulator and 12v LED blinker relay both work well on my scooters but are a bit of an unknown on this project.

The universal speedometer was an Ebay purchase that was priced very well but had “conflicting” information and the included documentation with the unit was just wrong in some places. Eventually after much frustration and watching of YouTube videos, I hooked it up to an old 12v adaptor and tested each wire to make sure what was what and wrote everything down. Using the adaptor then enabled me to test each lighting circuit without the engine running and proved to be a very handy thing indeed.

One of the things I had the most trouble with was the speedometer’s neutral light. I had run a new wire to the neutral contact assembly in the engine case and the wire tested fine but the neutral light just wouldn’t work. After removing the engine cover, I discovered that the activator for the neutral switch was actually missing – https://www.cmsnl.com/honda-xl500s-1981-b-usa_model7696/rotor-neutral-sw_35753428000/#.XHNL8YgzaUk

I hunted on Ebay and Googled everywhere to find one but a replacement was unavailable – bugger.

In the end, I just had to make one out of some bits I had in the workshop. It is just a “connector” between the neutral contact assembly and the internal gear selector. It was a bit fiddly to make and then to get it working right but it seems to be doing the trick at the moment.

The speedometer uses a magnet and a pick-up to ascertain the speed you are travelling at. There is a push switch under the unit that you use to program it for the tyre circumference and a few other things. I had to make up a bracket for the pick-up and attach it to the right front brake caliper which then allowed me to put the small magnet over one of the bolts that holds the right side brake disc on. This was the best way to get it to work as the wheels are alloy and the magnet wouldn’t stick to them.

There are still a few things left to do but nearly a year later, it is starting to come together nicely.