I finally got most of the SS180 sorted out. There’s been a few changes made to it since purchasing it last year and I was going to run it in the Mille Miglia but had to change to the PX200 at the last minute. Most of the changes are just upgrades from stock hardware like the Maxxis whitewall tyres and the Pascoli and BMS shocks and a new rally exhaust for good measure.

The original seat had a broken catch on the back and the seat moved around a bit while riding it so I replaced that with one of the ScootRS ones. All the cables are done and I got a new gear selector cover – don’t try and use a PX or Super one as they wont fit because the screw tag, to attach it to the flywheel cover, isn’t in the right position.

The SS had terrible lights with the standard 6v system and I wanted to upgrade that to something better. I had a shit load of issues with the last CDI kit I got from ScootRS for the black roughie however I had heard some good things about the new Atomic kit. 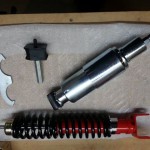 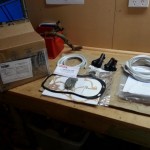 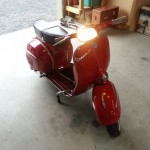 Its not cheap at around US$250 but it uses all new parts and includes all the extras you need: 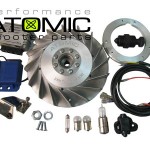 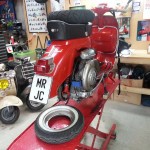 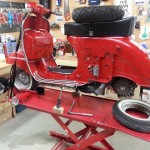 Installing the kit was reasonably straight forward and luckily for me the existing wiring for the lights was pretty standard so integrating the kit into the existing loom was just a matter of replacing the stock parts and following the wiring diagram. The lights now are just awesome and I even managed to source a light bulb for the speedo and get that going as well so while now the speedo is still wildly inaccurate, at least I can see it at night.

DON’T TRY THIS AT HOME KIDS

After foolishly adding a ScootRS chamber to the scooter and not adjusting the timing to suit, the scoot came to a halt out on a test ride. The carburettor already had a 125 up jet in it and was getting extra fuel and oil, but not changing the timing just killed it. On the plus side it did look and sound good but it was sheer stupidity to do this as the cast iron barrels for these motors are very, very hard to find.

Some of the other scooterists around the traps have since said that generally expansion pipes don’t add too much power to the SS motor anyway so if you are contemplating this for your SS, don’t do it unless you have a spare barrel and the time and money to fix it.

Because of the damage done to the bore, this meant I had to get it re bored and replace the piston. I was planning to ride this in the Mille so I went for one of the most common SS180 engine upgrades by changing to a PX200 piston (which I just happened to have one in very good condition), There’s a bit of work to get the piston welded up to suit the “piston ported” design of the original barrel plus the re bore doesn’t leave a lot of metal left surrounding the barrel. Matt Brookes aka Mr Skoot sorted this out for me as well as replacing the kickstart gear and re facing the corresponding lay shaft gear and installing a new clutch and flywheel.

Luckily for me one of the Canscoot guys was able to pick up an original barrel for me at a garage sale not too long ago so that’s now safely tucked away. 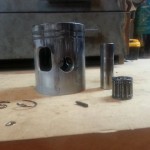 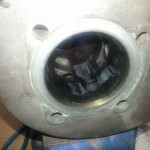 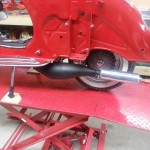 One of the hardest things to do on the scooter was to remove the motor. The SS had a swing arm bolt with nuts at each end and it was just seized solid. No matter how much heating, hitting, lubricating, soaking or drilling it was stuck. Eventually I borrowed a reciprocating saw from a mate and got the ends off flush with the body then crow barred the engine out. After a trip to see Bob at Gilkison & Engineering Maintenance, a local machine shop who have done a little bit of work for me in the past, they just pressed the bolt out for me with no problems.

New swing arm rubbers or rubber engine mounting bush make a huge difference to the handling and vibration of your scooter and they should probably be replaced more than are. Once you have installed them make sure you put plenty of grease in with the bolt. 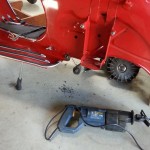 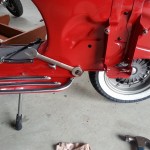 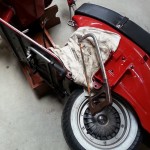 The original kick start intermittently “slipped” a bit, mainly because of a combination of a faffed clutch and kickstart gear. The lever itself eventually stripped and I used a shorter one off the bajaj in the interim until Paul at vespaspares.co.nz could supply a new one. Get the longer factory one if possible as kicking it over with more compression and a new clutch just puts a lot of strain on the lever itself and if you haven’t used a lock nut on the kick shaft bolt, get one of those as well.

So far the scooter is running well and it has about 300kms on it with a few more to go to consider it “run in”. The 5% mix isn’t helping the performance, not that it gets thrashed, but the more oil the better for the running in period. Once its run in it will be interesting to see how it performs and an up gear kit may be on the cards.