The CBR600 donor bike had been sitting for a long time and the front disc brakes were seized solid, so I will have to get some caliper kits and new brake pads all round. The brake lines have all been replaced with new braided ones because the original ones didn’t fit anymore and I had to figure out how the rear brake would now work. The original XL rear brake was just a cable from the rear hub’s brake arm that connected to the foot brake pedal and was activated by the pedal pivoting on a shaft and pulling the cable.

The CBR600’s rear brake had a system of linkages built into the right hand side rear-set and when the brake pedal was pushed down, the linkages then pushed up on a tag in the brake cylinder. Because I couldn’t get the rear-sets to work with the kick start I had decided to retain the original foot pegs, gear and brake levers however these were in very poor condition. I found an Ebay trader who had a complete set in good condition and got those in for the project. Having the old brake pedal enabled me to experiment with how I could get the new system to work.

There wasn’t too many choices for where the rear master cylinder assembly could go but it was relatively simple to weld a couple of nuts to a bracket and then locate that on the frame. By welding a small extension onto the brake lever, I could get the new brake system to work with the pedal becoming a simple lever. After I had completed this and adjusted everything I noticed that I had covered the swingarm bolt. While not a big deal it would mean removing the brake assembly to get a socket onto the swingarm bolt. After changing the bracket accordingly, I then decided that the brake reservoir looked hideous and didn’t match the one for the front brake assembly. I found a Brembo replacement on Trade Me which looked trick and had a round reservoir, just like the front brake and I only had to weld another nut onto the frame for that. 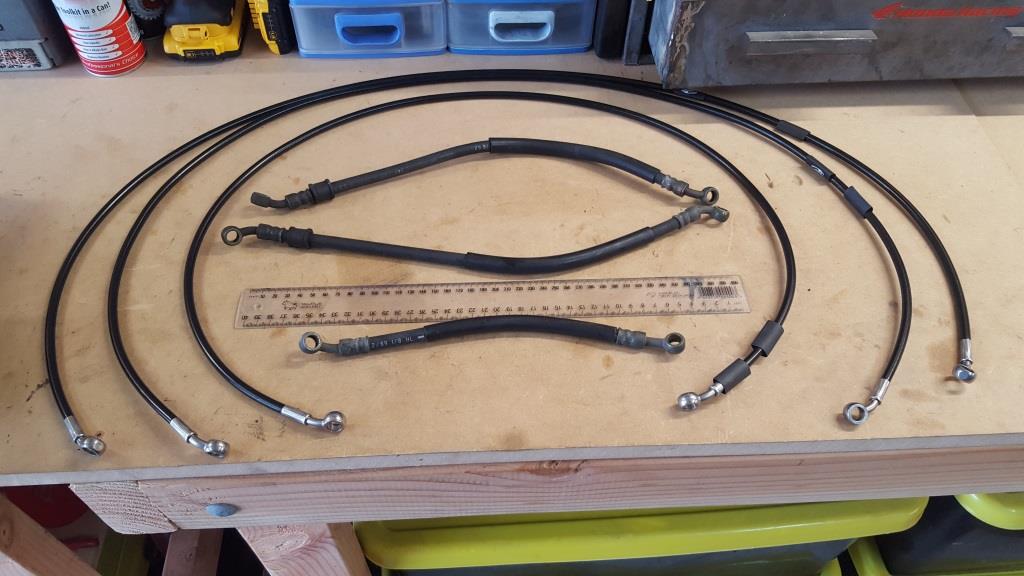 Image 1 of 9
I ordered some wheel bearing kits off EBay for both wheels and installed the new ones. I had originally thought about getting the wheels powder coated black but have decided to keep them as they are. They came up quite well with a good clean and I’m now thinking about new tyres but will wait until I get it on the road to see how it handles before buying a new set. The rear brake needed a brace to stop the caliper from moving as the original one wouldn’t fit and after looking around the workshop for a bit of steel to suit, I decided to just make one. I had some waratah’s outside in a heap and while they are normally used for fencing by farmers, I thought I would be able to re-purpose one for my needs. I cut a bit off one of them and ground all the rust off it and then just drilled some holes in it.

The bike is pretty much assembled and looks OK for a first attempt. Its not quite the pure Cafe style I was after but more of a fusion cafe/motard thingy.

I’m working on rust proofing the tank now and just waiting on parts to recondition the brake systems. Getting close to the running frame being complete and will look at disassembling everything for painting before getting into the wiring and anything else I may have missed.