The exhaust has been one of the hardest things to figure out for this first time fabricator. The original XL500s bike I had many years ago had a huge lump of a steel muffler that ran through the frame to the right of the rear wheel. The original muffler was hideously expensive and at that time you could just replace it with a Supertrapp or something similar and gain a bit more power. This project bike didn’t have a muffler and while it sounds awesome without one, I don’t think I would get away with riding it anywhere before a traffic cop pulls me up. The engine has a 2 port exhaust system with two 23mm header pipes connecting to a single collector and then to a muffler system.

Most of the Cafe style bikes I have looked at online, tend to have two rear swept mufflers exiting from a twin or four cylinder engine. My initial thought was to take this route and make a two into two system to replace the existing two into one exhaust. I could probably pay an exhaust shop to make a system to suit and then go to the trouble of making everything fit but I will make it as easy as I can for myself and may reconsider another exhaust option at another time. 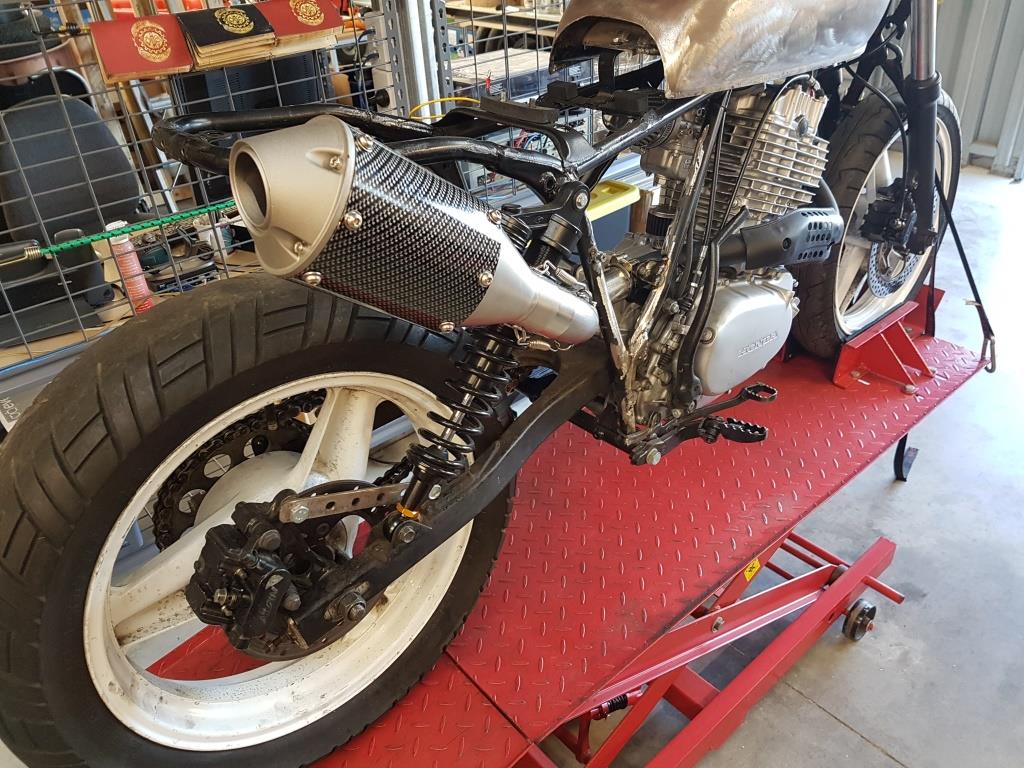 Image 1 of 6
I had considered many possible options to re-route the pipe and what muffler to use and was constrained by the room I had between the rear tyre and the frame. Also I don’t have a pipe bender and limited welding skills. While looking for possible “bolt on” exhaust systems I found on Trade Me, some mild steel mandrel exhaust tubing. They come in various shapes, lengths and diameters and looked like the right thing for me. I measured up the collector pipe diameter and found a 45 degree bend with an internal diameter to fit on to it and purchased two of them. This allowed me to see what my options were for routing the pipe through the frame or out and around the new rear shocks.

There were heaps of mufflers on Trade Me, Ebay and Ali Express but most of them were too long or too big to fit through the frame and look good. Eventually I decided on one that would fit the pipe bends I had and would look good on the outside of the frame. It came with a bracket, springs, a reducer and can be pulled apart and repacked if required. Getting everything to fit without welding it together was an interesting challenge but some string and some duct tape soon sorted that out.

The original muffler system was attached to the frame via a bracket. This bracket wasn’t going to work for me with the new pipe and I also wanted to incorporate the exhaust pipe connector into it so that it would be well attached. I ended up cutting off two brackets that I wasn’t going to use and then welding the original exhaust bracket back into a place that worked for me with the new system.

All in all it came out OK, but it took a long time…