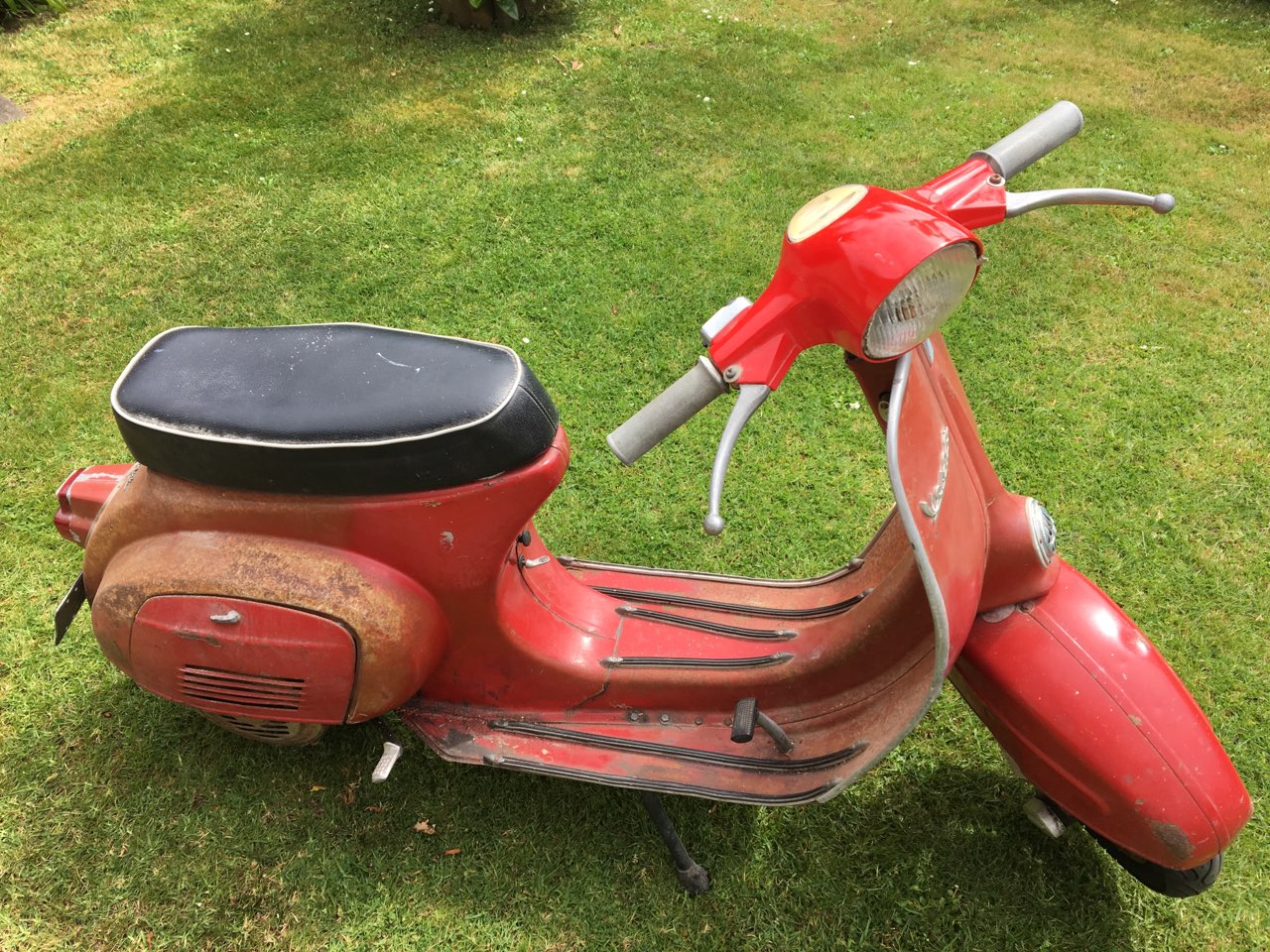 So I got a ring from a guy that was selling a Vespa SS90.

He was looking for a good home for his scooter and after talking to him for a bit and some emails back and forth I realised that he was actually a serious seller. We eventually settled on a price for purchase and some terms that would suit us both. Right up until I sent the money, I was still a little bit iffy about the deal. You know how sometimes when something seems to good to believe, that sort of thing. The bike had a good service history and a story I thought I would share as below:

From a South Canterbury woodshed to conquering the Auckland Harbour Bridge, this is the tale of my 1965 Vespa SS90 and I.

The farmer said he’d bought it for his daughter when she was at university. She’d long since finished studies and gone overseas and the scooter remained at the farm. This was borne out by a University of Canterbury parking permit sticker above the headlamp when my brother took possession.

He took the scooter to my father’s place in Cave, South Canterbury, on a weekend trip home and there it remained as a runabout for whenever us brothers visited. At one stage, my brother was low on funds and I lent him a few hundred, he said take the scooter as yours.

I went to journalism school in Wellington in 1985, embarking on a career from there in Wellington and then Auckland. The scooter remained, largely unmoved, in my father’s woodshed for the next 20 years covered by split wood in the autumn and uncovered by the diminishing wood pile again each spring.

In 2006, I stood down as a newspaper executive  and handed in my keys to the work car. Without a vehicle, I decided to ship the scooter north to do it up for short trips around the Auckland suburb of Birkenhead.

It landed in much worse state than I remembered. The petrol had rotted in the tank, one of the casings around the front levers was cracked, the other was broken. The headlamp was smashed and the paintwork was much more rusted.

ScooterWorld in Grey Lynn picked it up with my instructions to get it running and I would work on the extra restoration over time. $1323.51 for a barrel hone, the fuel tank reline, headlight and tail light bulbs and fresh oil and spark plug. I also had the rusty exhaust pipe replaced and a jet carb installed to try and give it a little more pick-up.

The upholstery on the seat was torn so I bought a complete new seat, shipped from Vietnam for about half the best price I could get for having the old frame recovered (sorry local businesses).

At some point the scooter became known as ‘Bullseye’ after the craven horse in my young son’s favourite movie Toy Story (Woody hollers “ride like the wind, Bullseye” and the horse’s pants fall down) .

For a year or two, I freelanced as a journalist. Local trips to the supermarket, shops and to pick up my son from primary school were made on the unregistered, unwarranted bike with the unlicensed rider. Great times. There were a few scrapes along the way, as every rider will have.

On one occasion, I cornered round a sweeping left hand bend into a notorious intersection called Verrans Corner. Picking up speed down the hill towards the roundabout, I noticed a wet sheen on the road. I had just enough time to think, “I hope that’s not oil” before Bullseye slid straight out from under me and I was running alongside, still holding the handlebars . I leapt back on and gunned the throttle and she chugged along in third gear, homewards. As I neared home on each ride, I’d give the headlamp a rub like a lucky charm and say, “good work, Bullseye”. I think I rubbed the headlamp all the way home that day.

When the throttle cable snapped, I tried looking up how to replace it and that was about when I fully realised I was not the person to be restoring a scooter. But I rode on, one time evading police interest  by pulling into a VTNZ station as if I was enquiring about becoming a good, legal citizen.

In 2010, the scooter had a brush with the glamorous film industry, appearing as a prop in the short movie Blue Mermaid. The actor spent more time trying to prop up the kick-stand than he did riding on it.

In the spring of 2011, we very nearly ended our time together. This time in warm, drizzling rain on a roundabout in Northcote, a car pulled into my path. I leaned over to swerve and away we both went. I slid into the gutter, breaking my left thumb and worse, breaking what was left of the casing around the clutch lever. I roll started the scooter in second gear and put-putted shamedly home, hiding my injury from my wife until I had to admit why I was washing the dishes one-handed. Bullseye the Vespa SS90

By April 2012, my hand was almost healed and the scooter was picked up by a little truck to go to Scootling for repair. It got a new handlebar housing and the old stilleto levers were replaced with balled ones, as well as a new clutch kit.

My wife and kids were looking over the scooters in the workshop when I went to pay for the repairs and the freighting back home. I slipped on my helmet and gloves and coasted out the door, calling to my wife “follow me!” You’re not riding it home, she shrieked.

Through the central Auckland suburbs, I hurtled. Onto the motorway at St Mary’s Bay and up the harbour bridge. At the apex of the Auckland Harbour Bridge, I stood up in the footwell and raised a triumphant fist. Bullseye never missed a beat (though I missed one gear change and was nearly rear-ended by my terrified wife).

At some point after that, the scooter developed a troubling knack of cutting out when turning right. I compensated by taking trips around the neighbourhood in big sweeping left hand routes. Or making right hand turns by leaning, rather than turning.

Last summer of 2017/2018, the scooter got a flat tyre and Bullseye has sat in the garage, forlornly looking up at me each time I go in to fetch a gardening tool or the lawn mower. I’m in my 50s now and should really be behaving myself, not barreling unlawfully around the neighbourhood putting myself and my insurance premiums in grave jeopardy.

If you see my SS90 in your travels, give it a rub on the headlamp, and whisper from me: “Ride like the wind, Bullseye.”

Currently Bullseye is a guest at a Wellington scooter museum and is an awesome example of a survivor scooter with an interesting history.

Thank you Edward and not just for the scooter.