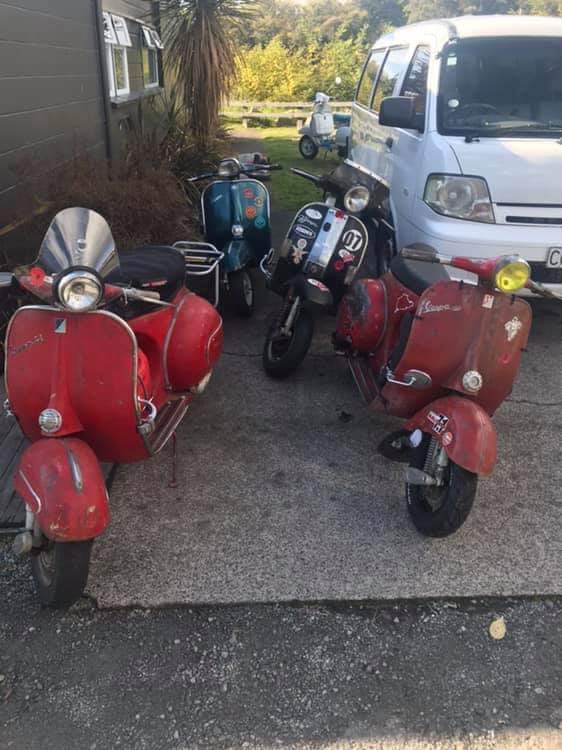 The Moto TT for 2019 was a bust for me personally but again was well organised with some awesome roads and destinations. Accomodation was outstanding with 2 nights at the Brackenridge Country Retreat & Spa in
Martinborough and 2 nights at DeBretts in Taupo as part of the trip. Having 2 support vans turned out to be very fortuitious although not just for me.

This year there were 11 teams, down a little on previous years entries. We had some international riders again this year from Australia and Italy which included Tino Saachi, a very well known man in Lambretta circles and the man behind the Targa Twin engine and Super Monza kits.

We missed last years event due to family commitments and were really looking forward to this year as it was based mainly in the Wairarapa region, somewhere we haven’t seen much of before. I had purchased a scooter for this event and spent some time riding it prior to the event, before then making some small changes to it. We started day one with four scooters but only finished the event with two. Andrew seized his Bajaj on day one just before lunch and I had fuel issues on my Belladonna not long after that. Day two was spent fixing the fuel delivery system at our unit in Brackenridge. Thanks to help from Shaneo and Mike, my scooter was ready to go on day three. Andrew had retired but managed to get his scooter back on the road and we briefly caught up with him and Hemi, another local scooterist, earlier in the day. Thornton and Dan both ran 60’s vintage scooters this year with very few issues and completed the event in good time.

A rookie mistake, late on day three, ended my event with a crash on a corner. My team mates Thornton and Dan were quick to help and waited with me for the support van to show up. Thanks very much guys and also to the staff at Whanganui and Kew hospitals, the event’s support crew and our awesome scooter friends.

As it turned out there were a few “offs” over the four days by other riders that have a lot of experience and not just only on this event but have been riding scooters and other bikes for years. Personally, as a rider of anything two wheeled, I accept that eventually I will make a mistake or someone will knock me off whatever I am riding. I wear the protective clothing, full face helmet and maintain my machines accordingly but sh#t happens.

The Tourist class was won by the Sons of Anchovies this year. Congratulations to Martin and his team.

Flying Cock Racing took out the Trophy class and good on them. They always look like a team, have fast bikes, ride like demons and fully deserved the win this year. Congratulations to Ryan and his team.

Christiaan and his team have done it again with another great event but there won’t be one next year. Possibly the year after depending on location and numbers. The Moto TT is constantly evolving and the pressure to provide an event that suits everyone must be immense plus there is being a competitor, organising a team and then being responsible for scoring, support logistics and any other event issue.

I really hope Christiaan carries on with organising this event and retains the support of the NZ scootering community. It seems that there is interest from abroad and there is also a hard core group of scooterists that like the event, so it looks like we may be in good shape for another Moto TT.