Recently we attended the 11th annual Burt Munro Challenge with scooter friends from around the country. This years event coincided with the opening of the new Classic Motorcycle Mecca here in Tay St. The Bill Richardson Transport World and Motorcycle Mecca are both world class collections now part of a local families vision for promoting the area.

Once housed in Nelson and known as NZ Classic Motorcycles the entire collection was sold to Transport World in May 2016. Given Transport World’s natural enthusiasm for wheels and, the regions celebrated obsession with motorcycles, it presented an opportunity of a lifetime. Widely regarded to be a world class display the collection houses over 300 motorcycles and motorcycle related artwork.

Like earlier events the weather was looking a bit dodgy but there was a good turn out of tents at the campsite and generally the weather was good until the Sunday with only the odd shower here and there. Matt and Pete, an Auckland based scooterist and bass player, made the trip down to the site and camped out to enjoy the rally experience with Matt looking to compete in one of the events at the Teretonga Raceway on the Saturday. 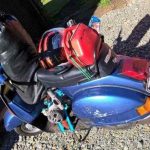 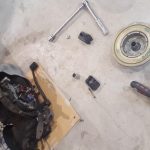 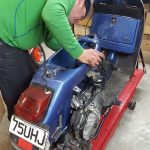 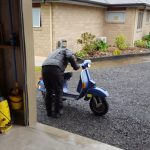 Matt or Mr Skoot is a well known scooter identity in New Zealand and works on scooters for local scooterists in Wellington. Very much in the ethos of Burt Munro, Matt rode his Vespa scooter down to the rally site with a 177 PX / Quattrini race engine strapped to the floor, a gear bag, tools and a spare fuel container. After a long night in the shed the race motor was eventually transplanted into the frame along with a new carburettor, ignition, wheels, tyres, brakes and assorted cables and bits stripped from the original motor and some Southernscoot spares. 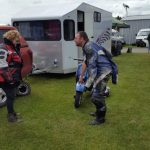 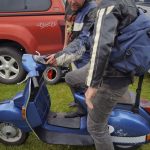 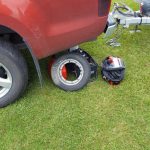 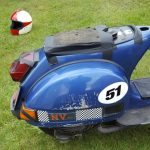 After getting a license from the local motorcycle club, at the last minute, and some avgas from a local contact it looked like Matt would be ready to go however one of the officials wasn’t happy with his riding gear. Luckily a fellow competitor had a spare leather racing suit and was happy to lend it to the cause. The pits area at Teretonga had custom trailers, caravans with awnings and assorted tents all with spares, tools and generally somewhere to keep warm and dry but parked on the grass between a couple of trailers was the little blue vespa scooter that could. After removing the seat and the kick start and taping up everything that could break, N0. 51 was ready to go. There were a total of 3 races and a qualifier spread out over the day and other than a head wind into the straight, the race conditions were good.

The M-Post classic Pre 72, class had a field of approximately 20 riders and ended up with two DNF’s. 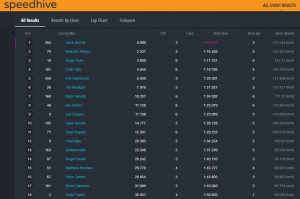 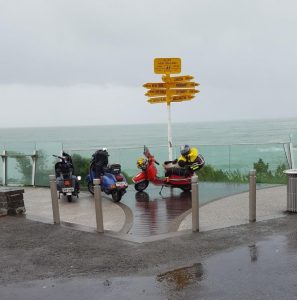 Watching from the sidelines was fun as not many spectators could believe that a Vespa scooter was actually out there racing and to be fair, against faster and larger capacity machines. Even though the results were a foregone conclusion it would have been awesome to have beaten one of the bigger machines but when you have ridden over 1100 kms to the event and then race, then ride 1100 kms home again on that same scooter, that is gutsy stuff indeed. Pete’s contribution of a 3600 km round trip is epic in it’s own right as not many scooters, or riders for that matter, would be keen to do that. After a quiet last day, a wet ride to bluff and then a trip up through the Catlins to Owaka it was time to say goodbye.

What an awesome weekend of scootering with a couple of awesome scooterists.