Who will take out the honors this year? 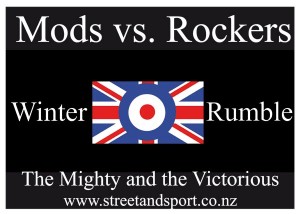 It would appear the Mods are showing great favorites entering into this years battle.

Due to overwhelming requests, this year will see a lot more time spent aboard your ride, – (possibly a Rocker tactic or request), thinking this may give them an advantage!  No doubt, the day will tell … not sure if it will be enough to phase the ever cool, well adjusted and tailored Mod!…

Anyway we will have team packages which will include various instructions as to certain criteria that needs to be met or captured or be created to fulfill tasks on the day.   The joint efforts of each team within each faction ie Mod Team or Rocker Team will go toward points earned.  Other points will be gained for turnout, both rider & ride and also combined including any pillion.

Both the Mods & Rockers will be divided into 3 or 4 groups (depending on entries).  Each group will appoint a team leader, (this is so any blame for any wrongful doing, getting instructions wrong and basic finger pointing can remove responsibility from other team members – selection will suit an acquired personality), this could be as many as 4 groups for the Mods groups and for the Rockers.  Therefore arriving with a plan could prove to be an advantage.

Arrive by 9.00am to register on the day, entries taken up until 11am.

Teams arranged by 11.10am with packs & leaders.