I managed to source a L/H side panel off ebay for the LC125 Lambretta frame I got from a local guy.

It came from a very helpful German trader and is actually off an NSU Lambretta. Nick, one of the scooterists in the know, had said that this may be my best bet of finding parts for it and so it turned out. It took about 5 weeks to get here via German post but its in very good condition.

“The NSU Lambretta started life in the 1950’s, being made under license in Neckarsulm, and between then and the time the production stopped in 1957, some 189,000 examples were turned out of the factory. Based on the 125cc engine unit, early examples were as Innocenti had designed, but soon the NSU works modified the scooters with their own extras”.

I have had to do some panel beating to get the side panel to fit properly which has been hard considering the rear of the frame is quite rusty and I’m not a panel beater….

I had an old rusty old 8″ vespa wheel rim, which after some cutting and grinding I adapted to fit as the front wheel. I also had a pretty well shagged whitewall tyre and an axle bolt I found in my bits and bobs. After a bit of mucking around the wheel now sits as it should and doesn’t look too bad. 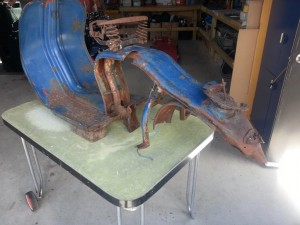 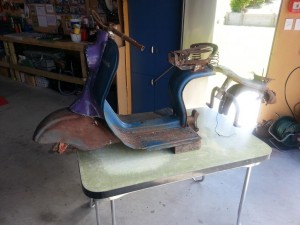 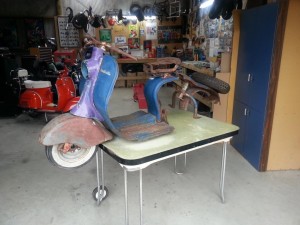 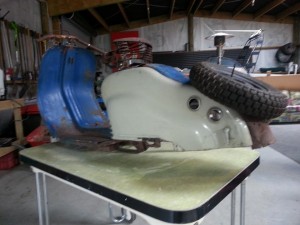 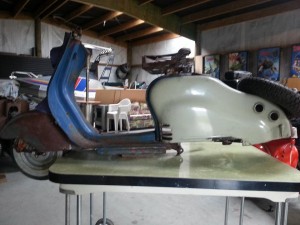 The headlight piece doesn’t quite fit but is close enough and looks good for now.

Now onto the rear wheel…