The last time I rode the super it went well but near the end of the ride it was right down on power and just didn’t want to run. It would start and idle fine but would just die in top gear and I eventually had to ride it home, thankfully not too far, at about 2km/hour. Thinking back to what may have changed, I originally 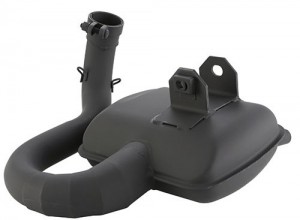 had a ScootRS expansion chamber on it but Mrs JC wasn’t keen on the noise it made so I swapped that out for a cheap Sito, that I had got off Trade Me.

I had changed the main jet to a 120 for the expansion chamber and the bike ran well but was just too loud. I cleaned the carby and put a 116 jet in it and took it for a ride but this made no difference at all. The Sito was pretty shabby and I had been looking at the SIP Road exhausts for the Black Roughie project so had got 2 new ones in from SIP.

Bizarrely the SIP road didn’t foul the stand in any way, went on pretty quickly and after putting the 120 main jet back in, it started and idled away happy as Larry. The exhaust wasn’t as loud as the expansion chamber, sounded better than the Sito and also meant not having to remove it to get the rear wheel off. The scooter ran exceptionally well and so far has been one of the best modifications I have made to it.

Obviously a lot of thought has gone into the design of these exhausts as the one I put on the Black Roughie transformed it into a different machine. The obvious differences are the segments in the pipe from the muffler and the addition of 2 spring tags for attaching to different barrels. The springs aren’t overly long but there is a small plate included to locate one of the springs on to one of the flywheel cover screws and you would then just have to drill a hole in one of the cooling fins to use the other one.

Recently we talked about taking the scooters out for a run, something you have to plan with the weather here in the deep south over the winter. I thought a quick check of the scooters was in order, for fuel, tyre pressures and anything not working. Mrs JC’s Super started fine as the battery had recently had its annual recharge along with the rest of the vehicles with batteries but the headlight didn’t work so a quick check was in order. 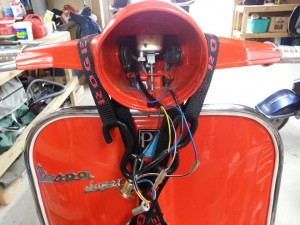 I was lucky enough to have a new spare one for a Sportique that is one of the next projects. The old light was one of those ones that you can only get slim bulbs in through the reflector before clipping the wiring plate on and then I had to change the wiring connectors but eventually got it hooked up – still no go. After checking with a meter for continuity to the switch and the regulator and then confirming that power was coming out of the regulator, I checked the original wiring diagram I had followed when I rewired the scooter but couldn’t see where an issue might be.

It’s such a scooter thing, that when you want to go riding there will be something not working and that the quick 5 minute fix invariably turns into an hour or two followed by swearing and general grumpiness….

After a cold beer and some timeout on the computer, I rang my auto electrician friend.

After explaining what I had found he asked about the earth for the light – What earth? It used to work and didn’t have an earth.

It has one now and the speedo light works as well.