The Bajaj has had quite a few additions as it has evolved from Barry the Bajaj into The Black Roughie. In effect the Bajaj has become the test bed for all things scooter and will continue to be “adjusted” as time permits. It has been a great learning tool as I have been lucky enough to be able to do what I want to it but not have to rely on it as my only scooter.

The S/H glove box went on with no problems and it is huge, compared to the standard Vespa ones plus it came with a key so all good there. The rubber seal isn’t the best but it works okay. Originally the spare wheel was mounted there but I would rather have the extra storage. The spare will probably be mounted onto the rear of the scooter.

The fuel cap had an old cork seal that was pretty well buggered and fuel would sometimes leak out so a shiny new chrome one has fixed that.

The ScootRS pipe of doom really wakes up the DR177 kit however it has a very peaky power band and then just dies in top gear. While a lot of fun from a standing start, it’s not very practical on the road. A new SIP Road exhaust has now made a huge difference with useable power through every gear. Its not as loud as the expansion chamber and now the rear wheel can be removed without having to take the pipe off, so a big win all round. 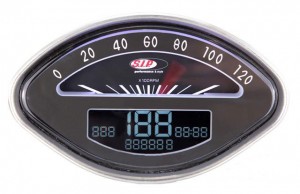 Capn Crac has one installed in his GS and really rates them so they must be the go. The temperature functionality also appeals. However it doesn’t look like there is a 2.0 version available in the Vespa 125 GT/150 VBA/VBB/GL/GS/Sprint/160 GS/180 SS at this time so I may wait for that one to come out.

A new feature of the 2.0 version is the choice between an analogue speedometer or rev counter. The speedometer needle can be used to display either speed or rpm. During longer trips you can also record the total time of your journey and the average speeds for both daily stages and the whole tour, which can be set up individually.

The total number of kilometres travelled, recorded by your original speedometer unit, can also be transferred to the km value displayed. In combination with the SIP fast flow fuel tap, with fuel reserve sensor, all Vespa models can now benefit from a fuel level warning function. To indicate the ebbing level in your fuel tank ‘FUEL’ starts to blink on the electronic display. In addition, it also improves the voltage regulation of your complete electrical system.

I had better start saving…..