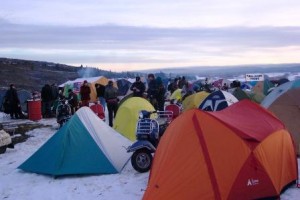 The Rally is one of the last great motorcycling adventures in New Zealand.

The Rally is always held over Queens Birthday weekend at Oturehua in the heartland of Central Otago.

The last Brass Monkey I went to was in 1990 on a GS750ES Suzuki with some friends when the weather was excellent and not that cold. I had intended to go by myself on the PX this year because its the 30 year anniversary, but got a call from a keen scooterist just moved to Invercargill who wanted to go. Saturday morning rolled around with clear weather forecast for the weekend and just after 9.00am Andrew Ross turned up on his 1968 150 Super ready to go.

The Super looks a bit “well ridden” in places and obviously has some history, but runs like a clock. Sunday morning before we left the rally site, fuel on and one kick – away she went and sat there idling nicely. Andrew has relocated from Wellington for the remainder of the year so it was great to ride with someone else for a change. No wind but no sun as well was alright until Mataura where we fuelled up for the run to Alexandra and where I put my leggings on to stop the cold – wisely Andrew had his on already. We stopped at Raes Junction and had something to eat by the old pub, which is now a private residence, when the local man that lives there came out to have a look at our scooters. He said that he had a 150 in his younger days and like us went everywhere on it.

The ride to Alexandra was colder and a bit slower as the hills took their toll on the scooters – we had already had heaps of waves and toots from other bikers as they went past and surprisingly few incidents of impatient car drivers trying to pass us in the same lane. A few large trucks were good for a bit of a fright when your not watching in the mirror ! We rolled into Alexandra on reserve and fuelled up at the garage and then had lunch at Subway. I tried the coffee machine there – some stuff came out of it eventually which looked like dodgy porridge but was hot, tasteless, soupy stuff.

We went for a bit of a walk so I could buy a $3 cup from the local $2 shop for the cappuccino sachets my wife had given me which unfortunately after a hard days ride also looked like dodgy porridge and was hot, not quite so tasteless, soupy stuff. We rode on to Omakau and took the scenic route to the rally site as I had forgotten that 20 years earlier we had turned off to go through Ophir and up through the Ida Valley to the campsite ! There was a good covering of snow all around but at least the road was clear. Any who…we got there in good time to run the gauntlet at the gate.

For those of you that haven’t been there before a local farmer has let the Otago Motorcycle Club host the rally there for the last 30 years and to get to the site you have to go through the farmers gate and up a hill to register and get your badge. The hill depending on the time of day and weather conditions can be either a gentle ride in low gear on frozen ground or a handful of throttle and take your chances on a deeply rutted goat track that’s been rained on then frozen. You could ride for 5 hours in really shocking conditions only to fall off on that hill and to add insult to injury there is always a contingent of rally goers who gather at places close enough to watch the gate entry and the ensuing hill climb. Having to stop then start on the hill is generally where the trouble starts. Unfortunately as we arrived an ambulance was making its way to the site for someone who had come off and may have broken his leg after getting pinned under his bike and gear. Some bikes are absolutely loaded up with gear and are marginally better on the trip home so the trip down the hill and through the gate is usually on every ones mind. 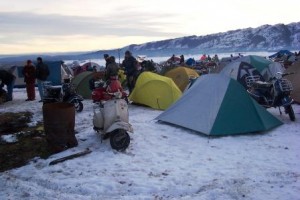 We were lucky enough to find a couple of scooterists we knew and set up camp with them. Jess from Wellington had ridden down from Christchurch on her 152L2 and Brent had ridden his malossi kitted vespa from Christchurch as well. Clive and Tony had ridden their PX’s from Dunedin so we were in good company. We also saw a white GS160 with a wooden fairing that belonged to a local Otago Vespa Club scooter stalwart from Alexandra and a collection of step thrus, mopeds and twist and goes. There was about four inches of snow on the ground where we pitched our tents and everyone was soon after the bits of cardboard boxes that were available for insulation from the snow. After a quick tent set up and unpacking the gear off the scooters it was into the coffees and a quick chat around the nearest fire drum. Andrew soon had the billy on and I soon discovered just how yucky the cappuccino sachets were. We were near where the freestyle motocross guys landed on their jumps and close to the toilet facilities so all in all, well placed.

There was a Christchurch contingent of bikers that attended the brass religiously, with each one having a job assigned to them for the duration of the rally. We were lucky enough to have camped by them and quickly introduced ourselves as they had the closest heat source available and had been there since Friday so they had a good supply of firewood. Barry was the man in charge of the fire drum and he stuck to his task with a constant roaring fire always on the go. He was an amiable man with a hearty laugh and quite easy to get on with. Graham was another man that was part of the group but I never learned what his job was as he was a pretty quiet man. A large Irishman called Thomas came over and told a few stories, as they do, about all sorts of things – one of which involved a green condom and one about being a motorcycle courier in England. He had been on the juice and a bit of the other for most of the day so was in fine form. He had one of those big BMW bikes they ride in the Paris Dakar races, with metal saddlebags on the back. Unfortunately it fell off its stand as the snow melted and fell against another bike – it took two of us just to stand it up !

What a horse of a thing, just as well he was a big fella…

Clive an anesthetist technician from Dunnas was soon filling me in on the Isle of Wight, where we are going to later in the year, and the sights in Portsmouth to go and see. As the night wore on it just got colder – not as cold as the night before apparently, but pretty cold all the same. Everyone took turns at warming their backs then their fronts at the fire drum. I wandered over to the bar for a six pack of Tui and stopped at the pit bike jousting on the way back. With a $200 prize for the winner the competition was hot with the eventual winner figuring out the only way to really win it, was to knock both the rider and jouster off the little bike and into the mud. The bands this year were very good with different music styles being appreciated by the large crowd in front of the 2 storey bonfire. The bonfire put out enough heat to warm a small country and gradually melted the surrounding snow turning the ground to slush – great for those that brought gumboots but a bit of a trap for those without boots.

The highlight of the night in my opinion was the fireworks display – Awesome. 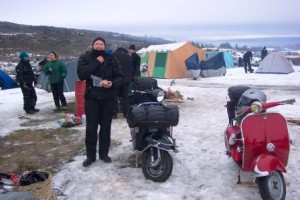 Barry was doing a great job on the fire drum and we had a few visitors stop by to tell lies and do a bit of fire gazing – It’s quite a hypnotic thing looking into the fire and apparently a great time for men to reflect and recharge the batteries, sort of like going into your shed and doing stuff. Eventually with the falling temperature people wandered off for the warmth of their sleeping bags and the chorus of snoring began. I must admit I was quite toasty when I hit the pit but as the time got closer to getting up again, it was literally freezing. It’s quite odd sleeping with all your clothes, hat and scarf and two pairs of socks on but quite handy when you do get up and get going. We wandered over to the fire drum and warmed up a bit then packed our gear up and loaded the scooters ready to go.

The trip down the hill to the gate was fine as the ground was still frozen but for those that left later in the day it could have been fun. The trip back to Invers was faster although it did start to rain at Omakau and got quite heavy at Alexandra, where we stopped for fuel – my goggles were constantly fogged up but it was too cold to not wear them. We stopped in Gore for lunch at the Capri cafe to reheat the hands and the old bones and re-arrange the riding gear. A hot shower and an afternoon in front of the fire beckoned so off home we went.

There has been a lot of talk about the riders that just turn up for the badge or stay close by in a B and B or motel / hotel – good luck to them I guess, they pay their money to get the badge. Some of the talk around the fire drum was a little negative about people doing that but compared to the ones that ignored signs and chained gates and decided to ride the Danseys Pass road – come on, what were you thinking ?

The cold aside (some of the hardcore riders who do the brass every year would say it was warm) the trip highlighted for me the importance of being prepared to camp in the snow. There are definitely a few things I would do differently if I went there again but without the cold and snow and mud and no sleep it just wouldn’t be a Brass Monkey Rally would it ?