We recently brought a 1966 SS180 off Trade Me. It’s not in mint condition but looks good and goes well. Its got some small issues that I’m sorting out as time permits.

It came with 2 good conti twist tyres however the spare was just a racing slick with absolutely no tread. I had tried to source another conti twist but found a trader on trade me who was selling Maxxis brand tubeless whitewall tyres.

The 3.50 x 10 are made in Taiwan however seem to be of good quality and the whitewall comes with a blue protector you just scrub off with water. They were pretty straight forward to put on the existing non-tubeless rims and have a directional arrow on the side of the tyre. With the inner tube valve stems that have the 90 degree angle on them you need to make sure, before you put the tyre on, that the valve stem won’t foul on the frame or wheel assemblies.

Only time will tell how good these tyres are but they certainly look good. 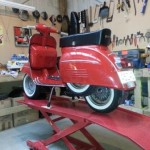 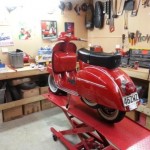 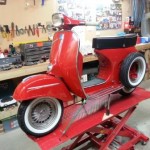 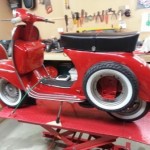