The PX motor installation has provided some challenges although I never expected this would be easy.

Basically it seems there are 3 brackets available for changing the original Douglas 125 engine for a PX – two specifically for the PX200 and another for a PX150 or a standard VBB or Super 150 motor. The PX200 ones have either 12mm or 10mm mounting holes for different sized swingarm bolts. The SERIE PRO PX150 one I used has the 12mm mounting holes. The top shock mount needs the thread changed for a modern shock and extension and the threaded piece just pops out of the rubber retainer. SIP has all the parts you will need or you could drill it out yourself and re-thread it. 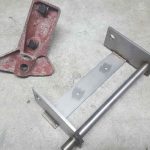 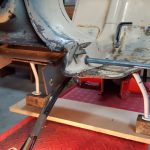 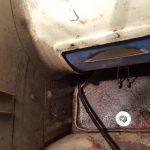 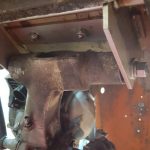 With the DR 177 barrel and head on this engine the standard PX150 bracket doesn’t allow the head and the shroud to clear the body. I tried fitting a standard VBB 150 engine and it clears the body no problem so it looks like the PX200 bracket would have been the better one to use, however with some grinding modifications to the head and barrel cooling fins the shroud now fits like it should. 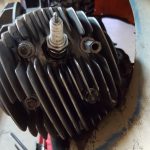 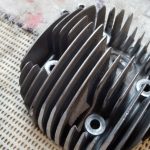 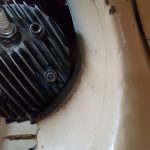 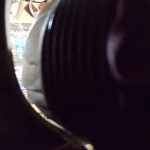 Once the motor is in the next thing is the rear shock and the carburettor and clearance with the body. A new rear shock, depending on what you get, is quite a lot shorter than the factory wide frame one and if you use the shock extensions, you will need to experiment to see which ones give you clearance but doesn’t jack the rear end up like a drag car. I got the scooter floor looking reasonably level from the side but the carburettor box is very close to the body and the lid won’t go on as it is. Andrew, one of the scooter guys here that has done some work on these old wide frames, suggested removing the carburettor box and changing the air filter however this just opens up another can of worms. 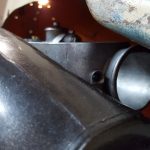 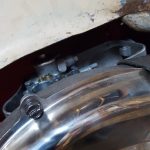 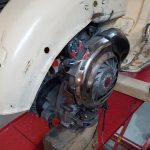 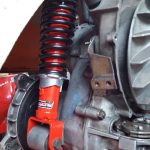 Removing the carburettor box is straight forward but you will need to put some spacers in for the 2 bolts that hold the carburettor on. Also I had to grind off a small corner on the top of the case so that the carburettor would sit flat and then made up a gasket to fit. 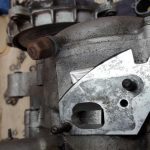 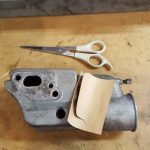 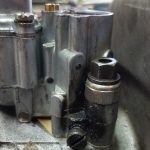 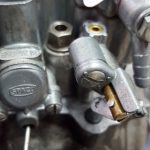 So with that all done we gained a little bit of room but lost the adjustment for the choke and the throttle. I managed to gain a little more clearance by turning the body lip upwards away from the carburettor assembly without having to cut it. While the air cleaner fits on top of the carburettor its still pretty close to the body and while seated the suspension doesn’t move enough for this to be a problem but going over a reasonable bump will be a different story. I have stuck with it as is in the meantime as there is still so much more work to do. Making up a bracket for the throttle cable was straight forward but the old cabling was in bad shape and replacing it, is now proving to be difficult as well. 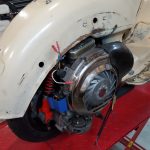 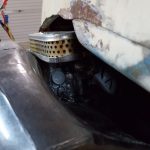 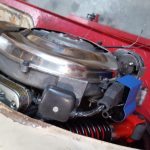 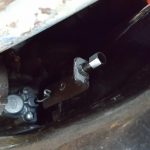 Having gone this far, I may as well carry on.