This year the opportunity to attend this rally was offset by having some paid business for a Christchurch based client so it was a no brainer to take the scooter with me. An excellent day out with a ride round to little river and a look about the damage in Lytleton the following day capped off with a pub meal and a few beers watching the footie – pretty hard to beat.

Another good outing with the Canscoot boys, although the numbers were down a bit (in light of  “shaky town” there were a few reports of damaged scooters and bikes) a good time was had by all. The conditions were awesome for riding with a nice sunny day and little wind, perfect for scooters !

There was a grand old Mod with his camel hair coat with mum on the back of a green Nzeta  – classy stuff and great people who dressed up for the occasion. He did the business on the slow ride through the cones and his wife was there in fine fettle supporting from the sidelines. 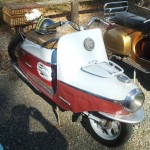 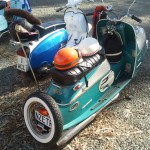 As it happens there were two NZetas there this year and what a great effort to keep these classic NZ (made under license) scooters on the road. With their very distinctive shape they are something you really like or you just hate ! I liked the red one with the cane picnic hamper on the back.

The Rockers this year pretty much got hammered by the Mods and some of the Rockers seemed less than keen to join in on the events that were organized especially the slow ride and classic egg and spoon races and as for the tug of war those greasy rockers just weren’t on the same page. There were some good prizes handed out this year and it was good to see the Parkas, the Ben Shermans and the desert boots out for the day.