So the Bajaj had another stock 150 motor with the “sporty note exhaust system” and just needed rewired….

The newish motor started and went well but needed some more go as carting me around was OK but not very fast and the 8″ wheels at any speed are a little scary, especially in the gravel roads around my neighborhood. Mrs JC now has a faster scoot and not being able to keep up with her on this one is not a very good thing.

After the amount of work and money I have already spent on this I decided to make some more changes to the “Black Roughie” as that’s just scootering for us slow learning southern people….

A couple of Trade me purchases later and I had another donor motor that, as it turns out, had originally come from Ross, an Otago scooterist based in Dunedin. It found its way from him to Mr Skoot in Wellington and then to Dan another Wellington scooterist and then to me. Originally a PX150, it had been fitted with a DR177 kit and a 24mm Spaco carburetor and just needed some minor tidying up before I could install it in the Bajaj. I already had the Scootrs “pipe of doom” exhaust so everything was falling into place. 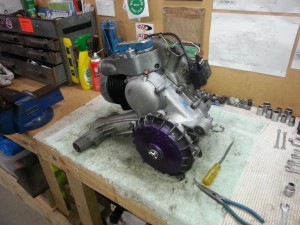 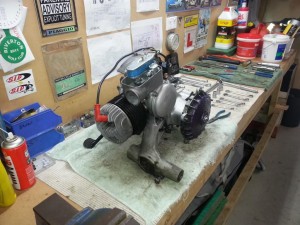 Mr Skoot also supplied a 10″ Atomic branded GS150 type wheel and tyre for the front. Traditionally, you would have put a whole 10″ fork assembly into the scooter and just used a standard 10″ wheel however this allowed me to retain the standard 8″ fork and hub assembly and to just bolt the new wheel on. It looks good and just went straight on with no issues.

One of the roughies side pods had some rust and a few holes in it so I sourced a S/H one through Paul at Vespa Spares. He sent me one off a Chetak which fit fine but had some holes for trim and indicators on it and it was a different colour. Recently I had painted another scooter, Elsie, with a couple of cans of matt black and silver and had some left over, so I decided to give the roughie a paint job. From a distance it looks great!! 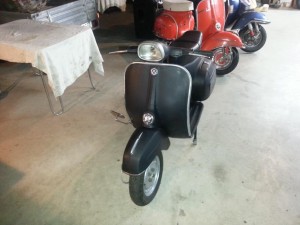 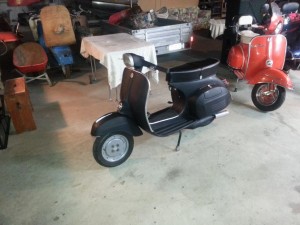 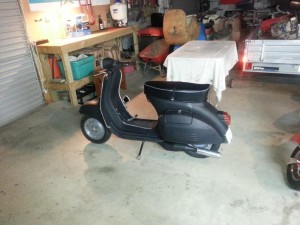 Another big day and a late night in the shed later I had the roughie painted, the new motor in with the exhaust, two new 10″ wheels, fueled up and ready to go. Unfortunately 2am isn’t the best time to be test riding the scoot so it had to sit there until the next day. It started 2nd kick and after taking it for a run then adjusting the idle, I went for another ride along the road adjacent to our property. The Scootrs pipe is quite loud however when you are giving it a handful it sounds OK. It goes very well indeed and I’ve been told the DR177 kit isn’t the fastest but is reliable compared to other kits. Time will tell…

So next on the list is the 12V wiring for the lighting system…here we go again…..