The motor now runs but the carburetor leaks and if you leave the fuel tap on it empties on the floor – BAD BAD Bajaj !!

So, now I have got a new needle and float and gaskets from Paul @ Vespa Spares. Cleaned the carby out with compressed air and put everything back together, but it’s still the same. 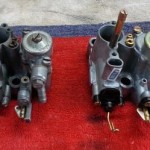 Anywho, now I have a shiny new Spaco Carby from Paul @ Vespa Spares.

After installing it the scooter starts and runs and doesn’t leak, even if you leave the fuel tap on – Yippee!

The lights issue turned out to be the brake light bulb was earthing at the connection and just needed a small plastic washer to fix that. The headlight connection was also reversed so had the pilot light on and not the main light. (should have paid more attention to the Scoots RS wiring diagram…..)

I filled it up with fuel and went for a ride. It runs OK but there is a small idling issue occurring when you come to a stop – you have to keep the revs on or the bike stalls. Well now the wife has seen it running, she wants to go for a ride on it. So after putting on the safety gear and some instructions, as she is a learner rider,  with some heavy handed clutching and a couple of false starts, she’s off.

I just need to adjust the gear change cables as the angle of the gear changer is hard for her to get used to and she keeps putting the bike in neutral. I get onto that and she goes for another ride which to my surprise is around the section as discussed but out the gate, onto the road and off ! ( geez I hope theres no police around)

The bike not idling when you stop is causing a big issue for her so I do some adjusting and take it for another run where the bike is going really well but still won’t idle when you stop.

I go to start it again and “bang”!! There is no compression and it sounds like somethings come loose internally as I can hear something turning/rattling that shouldn’t.