All through this project the aim was to just get this back on the road and to retain the character of the scooter as it was when I first purchased it. As time has gone by the floor area has been a bit of a concern in how it looks and there have been some rust issues with the sidepods and parts of the frame that if left untreated would only have deteriorated in the long term. Removing the rubber strips that were originally glued to the floor then the glue and some paint left a bit of a mess and as a dry fit of a new floor rail kit showed, there was no way of hiding it and repainting the whole scooter wasn’t an option. A local paint company here – Southern Paints used a paint sample from the scooter to make up a spray can of paint for me to touch up the floor and other parts of the scooter. 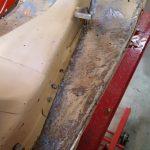 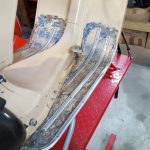 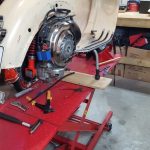 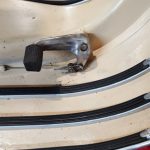 The Beige colour is very close to what was on there and other than my crap preparation and touch up painting the floor has come out looking not too bad. There is a bit of primer showing near the brake pedal but hopefully a bit of wear and tear will sort that out. The rail kits were a bit of a pain to install as the holes never lined up and not all of the holes in the floor could be covered by the rails. The outer edge rails needed small aluminium pieces placed in the edge channel to give a flat surface for the rail to attach to.

Also the pointy caps on the ends of the rails need a longer pop rivet if you are using pop rivets or they come with blind rivets that you can install with a ball pein hammer. By inserting the longer pop rivet from under the scooter into the cap, this made a tidier job than having the pop rivet showing out the front of the scooter. If you haven’t done floor rails before then inserting the rubber strips into the rails can be really easy or frustratingly difficult however, drinking beer definitely helps the process… 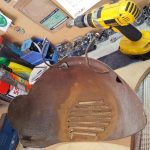 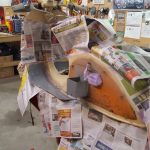 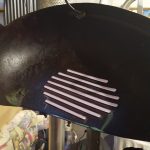 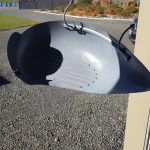 Both of the sidepods had some rust inside them with the motor side being quite bad. A friend had recommended a spray on rust preventative as a good solution before priming and painting. The local Super Cheap auto store had a CRC product called Rust Converter Aerosol for $23.00. Once the loose rust scale had been removed and after following the directions on the can, the treatment was pretty straight forward and dried reasonably quickly. After applying some primer for the pods and the left side of the body the result was pretty good – maybe not restoration quality but good enough to get it fixed. 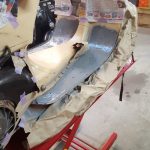 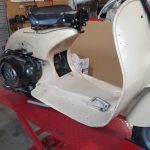 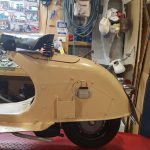 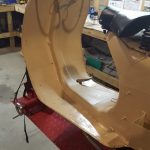 Once the painting and floor rails were completed there was just some small issues to fix up with the centre stand and the brake pedal. Initially I was going to use a side stand as I liked the look of the scooter leaned over however after trying one it didn’t feel right to me when the scooter was on the stand and I was worried that it may fall over. A standard centre stand wasn’t wide enough for the scooter and the stand brackets just wouldn’t fit the existing holes in the floor. After cutting the stand in half and inserting an old axle bolt I had in my scrap steel pile, I managed to get the stand located correctly with the brackets using one of the original holes.

The brackets had to be adapted to fit the underside of the floor and a new hole had to be drilled as the original stand had quite a different mounting system in size and location. My first ever attempt at MIG welding proved to be very rough looking but the stand is working OK so far. The scooter sits up quite a bit at the front so I may have to trim a bit off each stand leg to get it well balanced. 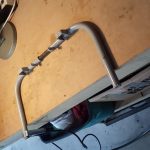 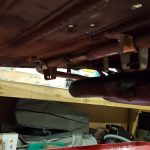 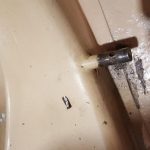 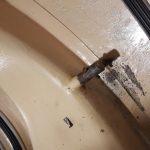 The foot brake had an annoying habit of sticking up vertically when adjusting the rear brake. This was because the pin in the rod the brake pedal pivots on, was worn and allowed the pedal to travel backwards. Usually the pin can be removed with a bit of CRC and some needle nosed pliers however this one was frozen solid and had to be drilled out and replaced. Other than the cable scratching a bit of paint off the floor, it works great now. I had some whitewall tyres that I was saving for a scooter such as this and after painting the rear rim and changing the old continental tyres the scooter looks quite good.

After adjusting all of the cables and going for a short ride out the gate and across the road there was an issue with the gear change where the scooter wouldn’t shift into top gear. After checking the handlebar and the gear selector the issue turned out to be with the handlebar. On a factory 42L2 gear change there are only 3 gears and when converting to a 4 geared PX engine, the shifter has to be adjusted accordingly so that it can rotate far enough before stopping. The only way I could get it to work was to make the first gear position on the shifter actually select neutral in the gearbox. This then allowed the shifter to rotate far enough forward to select the extra gear.

Once the brakes and the gear shift were adjusted the test ride went pretty well. The new seat is very comfortable but doesn’t allow a lot of room for taller riders so care must be taken when turning sharply so as not to catch the handlebars with your knees. The riding position is quite comfortable and you don’t feel like you are falling over the front of the handlebars unlike on some other single saddle scooters I have ridden. The original speedo works but vary’s wildly depending on how fast you are going and seems to be reasonably accurate at 30mph according to one of those LCD speed signs up the road. The front suspension works well but to be fair this isn’t going to be raced so it is a vast improvement on the old standard spring and shock absorber that doesn’t dive dangerously under braking.

The lights all work except the brake light but the light switch may need to be re-wired as when you use the kill switch, the position the switch is then left in, has the lights off. Its probably a good habit to check the lights are on anyway so only have to sort out the rear brake switch. The rear suspension is quite hard over bumps and has been set this way to allow the air filter to clear the scooter body but is just something I will have to keep an eye on when riding on the open road. Around town is fine and the seat actually helps with this by being a sprung unit. The old battery box makes an ideal oil container in the left sidepod and filling the tank is just a matter of lifting the seat and un-doing the petrol cap. The 177 goes well and it will only be a matter of time before estimating how far one can travel on a tank as the original tank only has a 1.25 gallon capacity or almost 5 litres of fuel.

Looking forward to summer and some scootering. 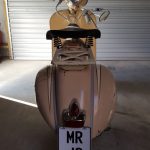 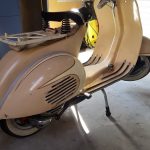 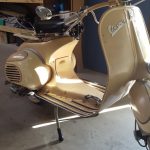 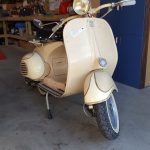 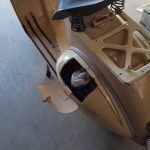 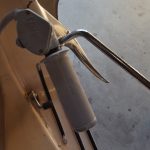 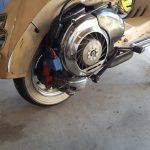 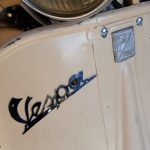